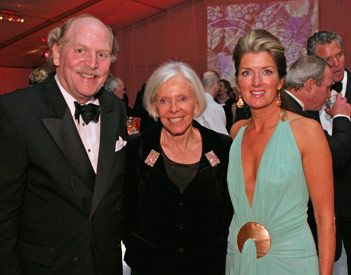 When people think of San Antonio, there’s a good chance they think fondly of one of its most prominent citizens, Alice Carrington Foultz. She’s got miles of style and here she gives us a bird’s eye view through the looking glass of her San Antonio.

You know her as Alice Carrington Foultz. The rest of the globe knows her as a philanthropist, art expert, adoring mother and certainly one of our state’s most stylish residents. Meet her for the first time and you instantly feel like you’ve known her a lifetime. She has that effect on people. Maybe it’s because she was raised with Southern hospitality, but most likely, it’s because she genuinely cares about people, her city and the world around her. She’s what you would call a “renaissance woman.” Which makes sense, since San Antonio seems to be going through its own renaissance these days. And does she ever love her city. “The best thing about San Antonio is that it has big-city services with small-town charm. I love the multi-cultural aspect of this city, and the dichotomy – I can go ride horses in the morning and attend a business meeting a few hours later,” she confides. She goes on to say, “We should all be serving as ambassadors for this city. San Antonio is finally appreciating what we have in our own backyard – from the missions to its multiculturalism. We are reaching new heights.”

Carrington Foultz reaches new heights daily as a mother and a successful business person specializing in the visual arts – and she’s also a recent newlywed. How’s that for having it all? When her husband died unexpectedly in 2001, she was left alone to raise her children, plus two children from her husband Claiborne’s first marriage. Her sons, Clement, a senior at Wake Forest College in Winston-Salem, and Rahm, a freshman at Southern Methodist University, are part of her pride and joy. Of all the roles she fulfills, she admits her children have been her most important project, and says, “I’m so flattered when they want to spend time with me.”

Carrington Foultz has found love again and also spends time with her new husband, Eric Foultz, a wealth management advisor with Navitas, Ltd. “Three years ago we met on a blind lunch date, set up by my son’s Godmother, and we were just married in Maui in May. Can you believe we went swimming with the sea turtles that morning and were married that evening? Which is just like us. We share the same passion for the outdoors,” she says. She and Foultz are often seen riding their tandem bike around town or horseback riding down on the San Antonio River. “Alice is the most active and productive person I have ever met – mentally, physically and emotionally. When she is awake, she is always ‘on,’” affirms Foultz. Combined (including first husband Claiborne’s children), they have six children ranging in age from 7 to 34. “They were our wedding party,” Alice says. “What I love most is the variety of each conversation with them, and the unique interests that each one has. When your children grow up to be great adults, that’s the pot of gold at the end of the rainbow.”

Then there’s also the successful business side of Alice Carrington Foultz. She’s involved in just about everything that makes life interesting in Texas. Certainly the art world leads that passion. She has put together art collections for corporate clients such as the Holt Companies of Texas and the San Antonio Spurs; major law firms like Jackson Walker; Akin, Gump, Hauer &Strauss; Kaufman Broad homebuilders; and the SBC Center. It’s a corporatewho’s who for the state. Any of the art installation you’ve seen at these companies has made this world a more cultured place, thanks to Alice’s intense knowledge and passion for talented artists. She ownsCarrington Gallery, Limited, which as she says, is “a virtual gallery. A gallery with no walls. We collaborate with San Antonio institutions for exhibits. I’m always trying to cross-pollinate audiences.”

Her excitement for art began by studying it at the ripe old age of 11, and then she also pursued sculpting as a young girl. That early love of art remains a zealous endeavor for her. “I have collected and advised others on building their art collections for 25 years,” Carrington Foultz says. “I love to attend art shows, openings, art fairs and travel extensively, with an eye toward the type of art my clients need. I enjoy what I do… representing a varied group of artists, with the main focus on contemporary American and Latin American art.” Over the years, she has established a strong network of contacts with artists, gallery owners and private collectors here, in Mexico and in Europe. San Antonio businessman and art patron Chris Hill, who owns the venue where Alice is having an art show this month explains that, “Alice seizes upon an opportunity and makes it happen. She’s deftly talented in recognizing those opportunities. Plus, she’s one of the most stylish women I’ve ever known, and the best damn quail hunter I’ve ever seen.”

Carrington Foultz’s thrill of the hunt also applies to her philanthropic and active community service. As she enters this next phase of her life, she feels there is still much to be done and to say she’s a giver is an understatement. Locally, she is a major component of the McNay Art Museum, the San Antonio Museum of Art, and also Linda Pace’s Artpace. Her latest endeavor are improvements to the San Antonio River, and she says, “It helps make the river available to everyone from the Alamo to the Missions. The San Antonio River and the missions are two of the brightest stars in city.” Her involvement is not only citywide, but also on a national level. When First Lady Laura Bush was putting together the initial Texas Book Festival, Carrington Foultz was one of the first people she contacted. She also devotes time to the President’s Committee for Arts & Humanities, as well as the White House Historical Association. Her passion also includes Prevention of Alcohol and Drug Abuse in Teens, where she speaks to adolescents across the state. These are just a few of the undertakings Carrington Foultz has been a part of in a lifetime of a culturally rich leadership role.

So these days, San Antonio can accurately be likened to Alice’s Wonderland. It’s ironic that the Lewis Carroll classic was her favorite book as a child. She says, “My mother gave me an Alice in Wonderland-themed birthday party as a girl, and I loved it so much. I even have the pinafore dress I wore to it hanging in my closet.” Funny how some things never change as this Alice makes San Antonio a wonderland for so many. Her husband might represent it best by saying, “One thing I do at least once a day is to draw a heart on Alice with my finger; and, of course, always with cupid’s arrow.”

LAM: Alice, I have to be honest… I’m pretty sure you’re one of my favorite people in this state. And I’m not alone. Tell me about your secrets to success of living a good life…

ACF: It’s simple. My theory is to mine one vein, and for me that’s always been the visual arts. If you are interested in something, then stick with it.

And one of those interests is the Texas Book Festival. You’ve helped Laura Bush with this project. Why is it important for Texas to have that?

From the beginning I knew it was a must for me to be involved. This area had the least amount of grant requests, and I did it because of Laura’s tremendous commitment to literacy.

What do you love most about the resurgence of San Antonio these days? Your city’s on fire with enthusiasm!

It’s terrific. We’re internationally recognized for the arts, which also helps to draw new residents. And we have the Spurs! I call it a ‘no reservation town,’ meaning that you can still go anywhere and not need reservations.

Many people know of your love for horses…and also Mexican rodeos.

I do! I love the traditional Mexican rodeo called the Charreada, which is about 400 years old. The Spaniards brought horses to America, as you know. It’s based on style and precision. To take part, you have to be in full, authentic outfits called Traje Con Greca The Charreada occurs once a month from May to October and my husband, Eric, is the only gringo member. He loves it as much as I do.

Why is the San Antonio art scene so important on an international level?

I think it’s achieved that international acclaim due in a large part to Artpace. We also have world-class architecture with the likes of Lake Flato. We have a major museum collection, like the Rockefeller Latin American wing at San Antonio Museum of Art. I’m also a big fan of O 4 Art, whose goal is to increase the art education presence in public schools. It’s really making headway.

And about your own upcoming showings…

You’ve curated stunning art for corporations. Any advice for someone building their own collection?

Buy what you love and pretend that it will be in your collection forever. Do your research on the artist, too. People don’t have to travel beyond here to buy great art because there are so many talented Texas artists. Also, I tell people to “warm up” before they go buy art. Go to museums and exhibits before you visit galleries. When you’ve seen the best, then your eyes are at that high level when you are in the buying mode.

And what are your personal favorite places for sources and inspiration of art?

I love everything from the Venice Biennale and Chicago Art Fair, to the UTSA graduate art show. With the students at UTSA, for example, I make sure they can measure up nationally and internationally.

You have tons of artistic style and personal style. Who has been your greatest influence?

Babe Paley is my fashion icon. And ‘elegant’ is my favorite fashion word. My own personal style is a little bit “on the edge” and “artistic.” Being in the art business allows me to dress the way I want with lots of variety.

Great choices. So what's the perfect outfit to you?

The perfect outfit is whatever I feel like wearing on a given day, but I do like to have everything well coordinated by color and just the right accessories. By the way, my favorite accessory is my running shoes, which I could not live without. I love to run.

Any other advice for our fashionable readers?

I think good posture and a positive attitude does wonders for one’s appearance.