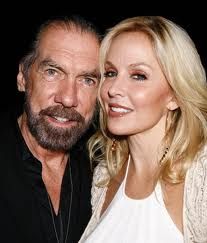 They are recognisable all right – from magazine advertisements photographed by the likes of international photography legends Richard Avedon, Annie Leibovitz, Matthew Ralston and the late Herb Ritts. They’ve appeared in their internationally-seen TV commercials. Perhaps they’ve been spotted at the next table, over at a local café.

It’s no secret that John Paul and Eloise DeJoria choose to spend most of their time in Austin, TX, running what many consider to be the most successful, non-conglomerate-owned beauty products company in the world. “I love it here spiritually and the culture this city offers – and of course, we love the music,” says Eloise. They could live in their penthouse apartment in Manhattan, NY; the home on Turtle Bay on the big island of Hawaii; or the 20,000 square foot place in Malibu, on the beach near Los Angeles, California – or in any of the other ten houses they own. Yet their paradise domicile is in Austin and the company is often run from a chintz chair and a phone, with a spectacular view of Lake Austin.

“Successful people do all the things that unsuccessful people don’t want to do,” says John Paul. He should know, since he was homeless at one time before he hit it big. Now, their empire is as far reaching as Singapore, Sri Lanka and Indonesia. His connection to Austin started when he lived here in the early 70s as a beauty products salesman. Later, upon moving to Los Angeles, the John Paul Mitchell Systems company was founded with his namesake partner, Paul Mitchell in 1979. John Paul is the business brain (an expert salesman, he has sold everything from Christmas cards to encyclopaedias) and his partner was the expert hair stylist who unfortunately died of pancreatic cancer nine years later.

John Paul lived out of his car at one point, before the dynasty began to take shape. All it took was that $700 ($350 each, much of which was borrowed) along with the powerful belief that anything was possible, to get it all started. That investment – that leap of faith coupled with hard work garnered the success many only dream about. According to John Paul, “We should have gone bankrupt perhaps 50 times during the first year.” Resources were so tight that the Paul Mitchell brand’s now-famous black and white packaging was a result of not being able to afford colour ink. As though to make up for that, the couple now lead a very colourful life.

Thanks to Eloise, colour in their home – and in their lives – is a way of life. As ‘the face’ of John Paul Mitchell Systems, Eloise contributes her talents to both the business and to the world around them. “Being with the company for the last 11 years has truly been a dream job,” she says. She blends her personal style into their home and every other facet of their lives.

I catch up with the DeJorias in their home. Upon entering, the main theme of white, accented with light, summery pastel colours, gives a welcoming feel to every visitor. The home’s décor is decidedly modern-meets-well-worn-English Country home and it works beautifully throughout the large spaces. Their modern outlook on life and the fact that English-born superstar designer, Rachel Ashwell of ShabbyChic fame, has supplied most of the furniture for the home, is the reason for the successful mix of themes. In fact, the DeJorias are such good clients of the designer, Ashwell gifted them with a formal dining room table that seats 12. On that table is a multitude of delicate floral English china and crystal patterns that Eloise’s favourite ninth grade teacher, Candy Williams, has helped her collect over the years.

The Scent of Flowers

Along with the bright white décor is the overwhelmingly fragrant scent of fresh flowers upon entering the house. Local floral genius, David Kurio, supplies the home each week with enough flowers to fill a garden. This is only one of the home’s many special touches. Then, there are the large sunken bathtubs. Long soaks are a relaxing and revitalising ritual for the couple. The tubs are surrounded by an array of Paul Mitchell products; a tangible reminder of the house that hard work built. Gleaming, blonde wooden floors; full size mirrors and an eclectic mix of art and photography help to further define the personal design style of Casa DeJoria.

One Couple Giving Much

Community service, on a global scale, is important to the DeJorias. From helping to save the land on which Native Americans roam, to saving rain forests, the effects of this couple’s efforts reach near and far. They are attached to dozens of international charities. Recently, the first annual Paul Mitchell Peace Love and Happiness Low Ride celebration zoomed into town to benefit the Austin Children’s Shelter. A star-studded motorcycle ride event with some of the DeJorias’ celebrity pals like daredevil Robbie Kneviel and Peter Fonda, the event was also in honour of John Paul’s birthday. Gary Spellman, the Southern Texas distributor for Paul Mitchell Systems and founder of Ultimate Face Cosmetics with his wife, Laurie, created the new event in honour of his good friend. “To John Paul, every day is like his birthday and I wanted to do something special for him. He is the only manufacturer-owner at the CEO level who visits salons where his products are stocked. He represents everything that is full of goodness and integrity – in our industry and in the world,” he says.

Most people wake up to a simple clock radio. The DeJorias enlist a band, The Keller Brothers (signed to Eloise’s record label, EllyMay Records), to periodically wake them up by playing their Austin-style tunes from outside the master bedroom window. Both hopeless romantics, John Paul and Eloise met in 1991 on a blind date when she lived in Los Angeles and he lived around the world. When John Paul asked Eloise to be his wife after a year of courtship, he did it in typically grand style. “He presented me with 1300 red roses and one Yellow Rose of Texas since I am from here, to see if June 13th might be a good day for me to marry him,” says Eloise.

This couple likes to have fun all the time, especially in Austin. They have a 1972 red Cadillac convertible, presented to them by a Houston business colleague and they love to ride around town with the top down. Big music fans, they enjoy catching a blues band at Antone’s after dinner at one of the many restaurants they frequent. They also find the style of Austin irresistible. Eloise says, “When I come back from Malibu, Austinites are right there with the same trends in clothes.” She feels the hair trends are hybrid now of everything from the ’50s to the ’70s, with a modern twist. John Paul agrees, “Austin style has a funky chic that I think is so great.” Whether in Austin, the West Coast, or Paris, expect John Paul and Eloise DeJoria to continue giving the world their vibrant spirit, energy and dynamism for many years to come.