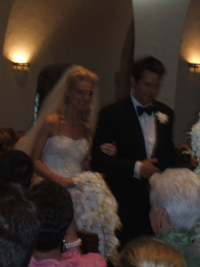 Two people in love, 24 bridesmaids and groomsmen, 800 guests and one large tent. Sound like familiar grandness? It might if you attended her sister Kimberly Schlegel and Justin Whitman’s wedding six years ago that was exclusively profiled in the Sept 2005 issue of Brilliant magazine.

But this past weekend was different with Kim’s younger sister Kari’s marriage to Troy Kloewer where the bride and groom lent their unique style to a majestic occasion. We’re calling it the wedding of the decade and luckily for us, the Royal Wedding in London last weekend was a warm up to what was in store in Dallas Saturday. Before that the out of town guest reception on Friday night at the Schlegel Manor got us in the mood for the weekend.

When I first got to know Kari, she appeared on the second cover of Brilliant in February 2004. Along with Kim and brother Kirby, the magazine’s issue caused quite a stir across the state. We hosted a party honoring them in Austin and it’s been a heck of a fun friendship with the entire Schlegel family over the years.

The kids were raised right by philanthropists and Pavestone founders Bob and Myrna Schlegel, originally from Canada. Canada’s loss of the Schlegel’s was certainly Texas’ social gain. They all know how to have a good time and Kim has even authored several books on entertaining that landed her recently as an Editor-at-Large for Southern Accents magazine.

Kari is now is a real estate agent at Allie Beth Allman and an M.B.A. student at S.M.U. in her spare time. Troy is a former college football hero and now an exec with the John Paul Mitchell Systems beauty empire where he has been mentored by our mutal pal John Paul DeJoria.

The bride, in a slim, white sheath satin dress with thousands of sequined flowers, had a train that cascaded down the aisle. Wearing very tasteful diamonds, she was the epitome of elegance. Thebridesmaids wore silvery grey sequined dresses of Kari’s design, according to sister Kim. The groomsman, most averaging over 6’2”, were as dapper as expected in basic black tuxedos. The church was at capacity with the several hundred guests who were then treated to the Dallas Symphony Orchestra and the Dallas Chorale with renditions of Handel, Pachelbel and Elgar classics.

This wedding, as one would imagine, took almost a year of planning. Save the Date cards were received in early 2011. It takes a village, as we know. When the royal trumpets signaled the beginning of the wedding at 6 p.m. at Highland Park United Methodist Church, we knew we were in for a treat. It’s no surprise that style guru Todd Fiscus planned the wedding and gala reception dinner. Think all white and silver in a fairy tale and that conjures the images of tens of thousands of flowers, candles, appliqués under dreamy lighting that Fiscus created with the Schlegel viewpoint. The reception, held in a chiffon tent at the SMU practice football field across from the church took ten days to construct and spanned the length of the field.

Two very proud families, a band that wouldn’t stop grooving, an audience that wouldn’t stop dancing and a bride and groom having the time of their lives was really what the evening was about. The cost of this shindig? Likely due north of higher that any figure you can conjure, but for memories of all of us who attended to support Kari and Troy, it was priceless.

The event had the most eclectic guest list ranging from Socialables to the unexpected...

we were seated at a table with perennial socialite Jacque Wynne and longtime music A&R mogul Jack Stevens who discovered The Sex Pistols and The Eurythmics. Now that’s a range of guests in this evening to remember.

Chat-worthy and seen in the crowd were Jerry and Gene Jones, Charlotte and Shy Anderson, Lt. Governor David and Tricia Dewhurst , Steve and Anne Stodghill, Jacque Wynne, Carloine Whitman, Patty Dedman, Jason Faucet, newlyweds Justin and Wendy Harvey and so many more to mention here who no doubt also had the time of their lives.