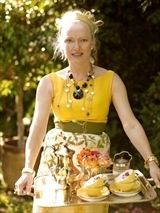 “My muse? That’s easy. My muses are my friends, clients… and the world around me,” confides entertaining expert Lulu Powers, who knows how to get things done. If you grow up one as one of six children, in a bustling Connecticut home like she did, that’s a given. Take that verve, add a heap of talent, mix in several dashes of personal pizzazz and talent… and you get a creation that is this Los Angeles-based, lifestyle entertaining expert to the stars. I recently caught up with her and her husband, celeb photographer Steve Danielian, over cocktails at the Saint Cecilia Hotel in Austin where she is bringing her talent to Texas, and being feted by Carla and Jack McDonald at a book signing this week. Her book, Lulu Powers Food to Flowers (Harper Collins) is already a bestseller to Sociables, Celebutantes and various Royalosities who follow her advice to a T. 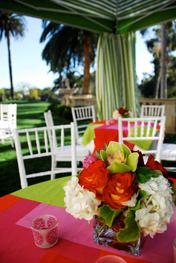 Did Powers come into this world wanting to be the caterer to the stars and preeminent party expert? Hardly. She moved to Los Angeles ten years ago from the East Coast to be… a comedy writer. A tough profession to break into, she pursued other avenues until she became a personal chef to supernova celeb photographer Herb Ritts. Anyone who knew Herb will agree that he was a kind and sharing soul. “He was amazing and so encouraging with what I wanted to do,” says Powers. And, from there it was up, up, up. She has catered parties for a Who’s Who of A-list celebrities since she started her own firm. She has the capacity to make it all look so easy – that’s what her clientele adore most about her, plus the creating chic, yet unpretentious, get togethers that feature both tasty cuisine and festive cocktails. “People are sometimes scared to do it themselves and I give them confidence that they can,” enthuses Powers. “It’s amazing what a simple piece of rosemary on a cheese board can do. And I am there to help them every step of the way.”

The buzz around Powers is palpable and it’s one of the reasons she created the book. “Teaching people what I know is important. I want to show them. Even in this economy, I show that they can have people over. I am a chef, but you don’t have to be a chef to entertain,” she offers. She goes onto say, “I want to instill confidence for those who don’t have it. They think they don’t have enough of things and I show them how they can use what they have, and even, things like how putting 10 single tulips, each in a different vase can have a big impact. Throughout my book I am teaching them the tricks of the trade.” The lushly photographed, full-color cookbook featuring 175 recipes and inspired party-planning tips are well thought out and is based on Powers helming hundreds of successful events. She confides that “I get inspired by someone’s home. Or I see something on the street that inspires me, too. Or, a swatch of fabric, the leaves on the tree. You name it, anything inspires me.” 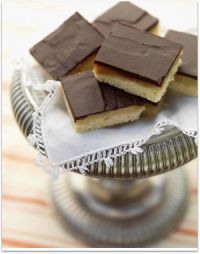 Some of that inspiration in the book includes her best, most crowd-pleasing recipes, including:

“Food is crucial in entertaining. If the food and drink aren’t perfect, then forget it,” Powers states, great advice for us all. “I want it to be fun and yummy. Always serve something a drink – I like making a special cocktail for each party – it makes the guests feel comfortable.”

More great advice from Powers: “Don’t be in the kitchen doing stuff – be out there with your guests. Make the effort. For people who think they can’t afford a party in their home, nowhere is ever too small. You can do anything! Even if you have dinner at a restaurant for 10 people with table-topper cards as entertainment.”

The book follows Powers easy-breezy way of seamless entertaining. And, the celebs, love it, too. Crowd pleasing cupcakes for a children's birthday party led to a gig for Sigourney Weaver. People like Leonardo DiCaprio and Mamake lunch for President Clinton's visit to Los Angeles. Most redonna sought her talents. She was even invited by the Blue Ribbon Society to the White House recently to make lunch for former President Clinton, and she is proud of the opening of the new Bloomingdales store in Santa Monica that was hosted by Barbra Streisand. Now that’s star power, or rather Star Powers. Run, don’t walk to get your copy of Lulu Powers Flower Food to Flowers now so you can start dazzling your own guests.