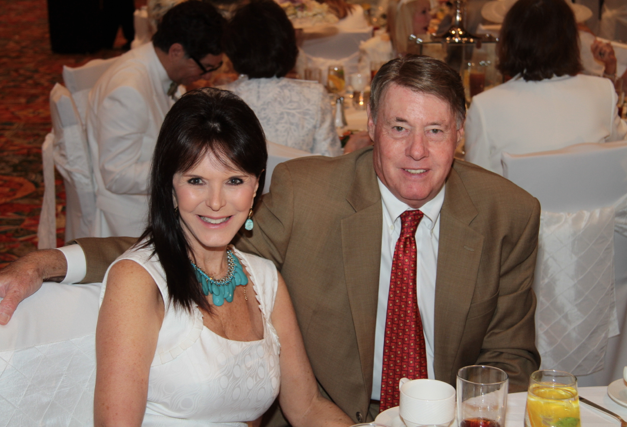 Recently in Houston, at the ballroom of the Hilton-Americas Hotel, a vision in white was created, thanks to Darryl & Co. In keeping with the royal wedding theme, tireless fundraiser Connie Cook (asked by the inimitable Joanne King Herring) chaired the event, "Royal Weddings - Then and Now" with HRH Prince Jean de France, Duc de Vendome as the guest of honor and speaker. The tables were decorated with centerpieces of white roses, lilies and hydrangeas that completed the sea of white theme as a backdrop when a special performance by French mezzo-soprano opera star Marie Lenormand preceded the the Prince gave his insight about presentation of historical French weddings, including his own, as well as the big upcoming one recently in London. This luncheon benefitted Ms. King’s Marshall Plan for Afghanistan -- To Bring Our Troops Home, and some are calling it the event of the year in Houston since the 400 attendees helped raise over $350,000 for the cause. Honorary Chairmen were Donna and Robert Bruni; and the special honoree was Margaret Alkek Williams, while the Master of Ceremonies was Dave Ward.

The Prince’s week-long visit to Houston was marked by five underwriter parties.Paul Somerville kicked off the festivities immediately after Prince Jean deplaned in Houston and threw a mini-rodeo and Bar-B-Q at his sprawling Richmond ranch.He also gifted the Prince with cowboy boots, a western hat, jeans, and a de rigueur Texas belt buckle. After two hours on a horse and line dancing to a western band, the Prince indeed became a full-fledged honorary Texan. Duc and Duchesse de Gramont, Susan Krohn and Patrick Gehm (with whom the Prince house-guested), Diane Lokey Farb, and Paige and Tilman Fertitta also hosted lavish parties honoring Prince Jean.

It was a grand day – and week - of events that will be remembered and treasured forever thanks to the hard work of Connie Cooke and Joanne King Herring.